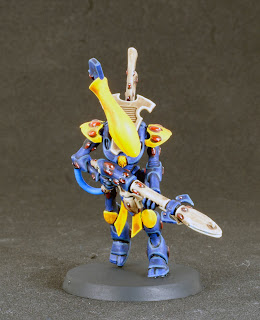 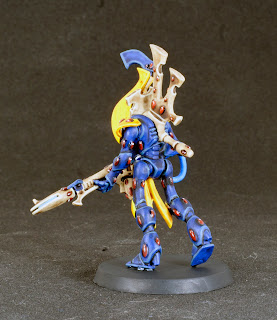 I finally finished this guy after so many months.  He had been sitting mostly done for months.  Just sitting there mocking me.  The major motivating factor in finishing him and thinking of starting the other 4 guys is 8th edition.  Short range auto hitting D weapons are just too much to pass up.

As for the painting, it's nothing new if you've seen any of my Alaitoc stuff over the years.  The standard blue armor with yellow.

The Hemlock Wraithfighter is getting very close to completion.  I probably should've finished it first, but I just wanted to get this guy off the table.
Posted by karandrs at 11:53 PM 2 comments: 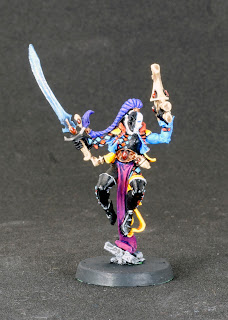 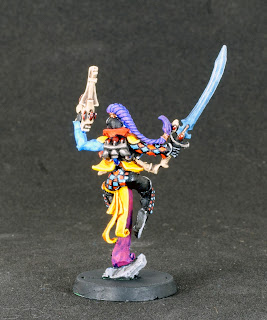 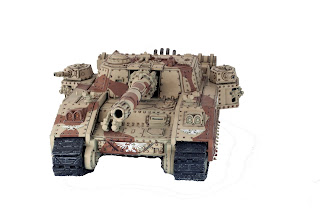 The Shadowsword I've talked about multiple times has finally seen completion.  It's so nice having this big thing off the painting table.
Read more »
Posted by karandrs at 1:49 AM No comments: 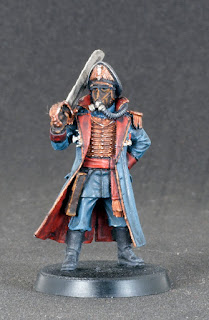 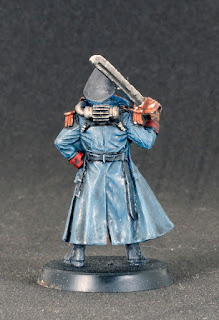 Two post within 24 hours!  Mainly due to the fact that this guy was pretty much done like a week ago.  I added a few finishing touches and snapped some pics.

It's the same general theme as the previous Commissar, but a bit grittier.  Something about the DKK stuff that makes you want to paint that way.

Posted by karandrs at 1:42 PM No comments: 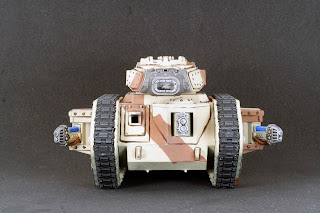 I did the vast majority of this guy in a day.  I did the turret last after a few days off.  It's pretty standard desert fare for me, but I did do some fun stuff with the weapons.
Read more »
Posted by karandrs at 1:17 AM No comments: 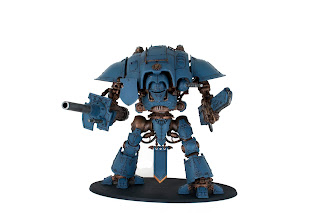 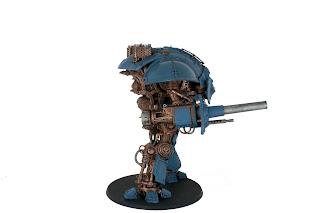 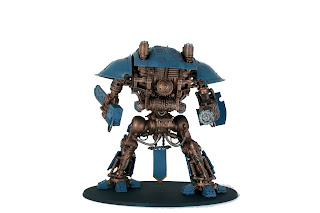 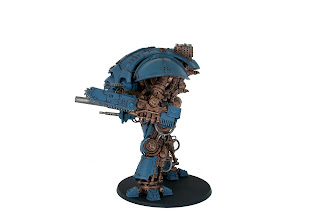 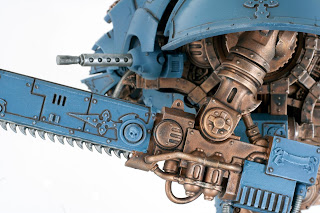 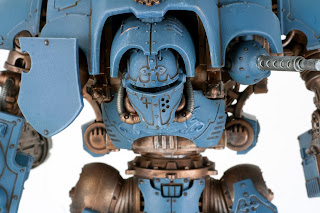 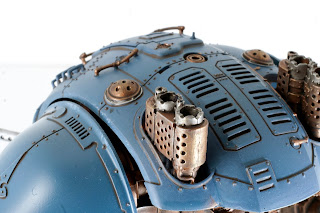 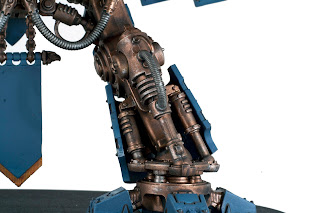 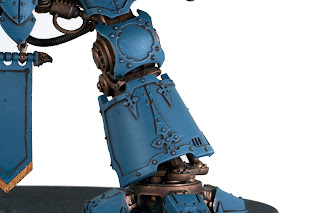 The pictures make it obvious, this is an Imperial Knight of the Paladin class.  My friend picked this up at first because it was a great deal.  It was a kinda fun build to be honest.  I put it together in an afternoon a few months ago.  I needed some palette cleansing from all the tanks, so here it is.

The blue armor is the same technique as the Taurox I did a few months back.  Black primer>The Fang Base>Thunderhawk Blue>Reikland Fleshshade in recesses>Fenrisian Grey Drybrush.  The Fang and Thunderhawk were both applied by an airbrush, such a nice time saver on a big model like this.

The brass was the same Black Primer>Balthasar Gold>Nuln Oil>Balthasar Gold>Shining Gold>Runefang Steel.  The first Balthasar was applied with the airbrush.  Then the shade with Nuln Oil, then the next three colors were dry brushes with a lighter application on each coat.

The little bit of Steel was just Ironbreaker inked with Nuln Oil and light Runefang drybrush.

I pretty much did this guy in a 24 hour period.   It was like I was painting a huge Mech back from my Battletech days.

I'll probably finish the Sentinel in the next few days.  I still have a Russ in the stripper to work on if I don't get anymore stuff from him until next weekend. 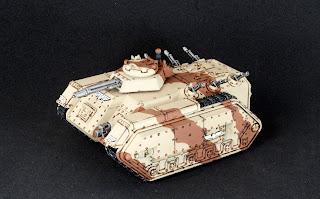 The squad of Cadians I finished the other day needed a ride. 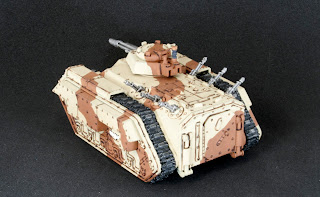 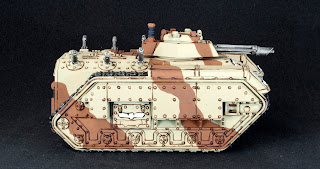 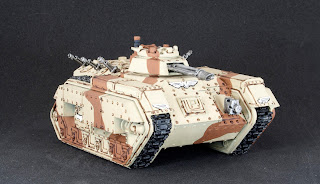 This is now the 5th desert camo AM tank I've worked on, so I've go the process down and can really finish quickly.  I primed it awhile back, but once I actually started to hit it with a brush it took only a few days.

If I'm not mistaken, the Chimera kit is still the same one they originally released.  I do really like the track guards on this guy.  On the Russ it's OK, on the Chimera I think it really adds to the model.

Hopefully those Shadowsword sponsons don't take too long.  I'd really like to finally finish that beast. There's another standard Russ in the stripper that I'll start this week most likely.